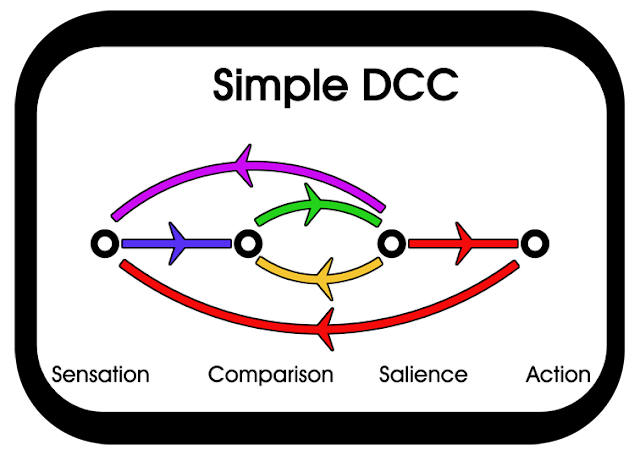 It's an interesting interview but my interest was most piqued when he opines on the progress he feels has not been made with regard to language translation. He claims that the current methods are "brute force" methods. It turns out he's completely wrong about the way that language translation works at least as done by Google using their translate tool. Google does not use brute force to do it's translation...instead it uses an iteration about ideas that are exploding in machine learning. In particular statistical learning approaches.

Peter Norvig﻿ has written a lot (of words and code) explaining how statistical methods can lead to very elegant solutions to extremely human like learning heuristics that come out of code.

As lead researcher at Google his approach is quite clear in the function of their translation algorithm which is basically the same approach that is being used to create extremely efficient AND low computational cost methods for making sense out of messy data sets.

language translation is one.

figuring out words from sounds is another.

figuring out objects from images is another.

figuring out words based on swipe patterns is a next one.

Google's very reason d'etre, the efficient search algorithm that got them to wipe the floor with all the dominant engines at the time of their emergence with highly (scary accurate at the time) results came about from using a statistical approach (Page rank is fundamentally about that method).

It is interesting because the intelligence *emerges* as specific heuristics are repeated in different ways across the data set.

In my research and work on the action oriented workflow algorithm and later the action delta assessment algorithm, these same statistical ideas are at work.

1) Learning systems are those that seem to demonstrate an ability to encode experience deltas (small units of change) of action potential (the chemical firing heuristic of active nerve cells) across memory cells...this includes neurons and glial cells like astrocytes.

2) Learning systems have a fractal depth of encoding, meaning that by having the ability to encode arbitrary deltas as per 1) there is no limit as to how specific or granular the encoding of some sensory data set can be...this is the key behind the hieararchical segmentation of the brain for any sensory data set.

3) To go from simply reacting to learned stimuli to actually responding to temporal flow of extant and future needs some way of gauging present experience with respect to future need is required. The autonomic and emotional modulation centers of more complex brains perform precisely this real time salience convergence process...and consciousness is merely an emergent *side effect* of this process.

So getting back to language translation, at the moment the resolution of import captures the likely semantics between various combinations of letters in a given character set and letters in another character set. It correlates likelyhood of  finding these things next to one another, true this is not the same as *knowing* the meaning of the words but *knowing* is simply an orthogonal correlation to a different dimension of import. In our minds salience connects these different dimensions for example. Linguistically the statement:

"I am going to eat a burger today."

Is understood as a likely set of connections between words that has experiential familiarity...as we've all likely eaten burgers today. That familiarity fires off multiple dimensional recall tasks on burgers, types of meats we've had or not in them, our favorite type, the favorite condiments...where we last had them...the smell of onions ...etc. Our minds associate with these recollections of burgers pulled out of the linguistic association of the symbols used to define these words coupled with the autonomic (how we currently feel physically about a burger? are we hungry? will we be hungry?) and emotionally about a burger. (Were we sad the last time we had one? Does the fact an animal die weight on us when we consider eating one?)

The real time battle of orthogonal relations correlated to the symbols emerges our cognitive flow in the conscious mind...without autonomic and emotional modulation in 3) there would be no flow...there would be simple a mostly static jump from triggered internal need states (the autonomics) by matching external experience or sensation states ....we'd all be frogs or flies or cockroaches. Intelligent no doubt...but existing on a granular level of consciousness with far less of the real time dynamism of multi dimensional concepts as our brains are able to engage in and thus absent a present sense of awareness to mirror our own.

I have been writing down the components of this autonomic and emotional bound theory of consciousness for a few years now and in my work on Action Delta Assessment found a kernel through which I can explore the multi dimensional combinations necessary to create what I call a dynamic cognitive agent. I assert that it is not possible to create such an agent with a fidelity of thought as high as ours without having all 3 of the hypothesized attributes listed above.

I won't be getting to putting code to my cognitive state diagram which connects the pieces in the way I've described for several years now but the gradual approach to more intelligent pattern matching and response systems as evidenced by Google's translate, Boston Dynamics walking robots and the "big data" algorithms of statistical nature being thrown at all sorts of problems from language translation to word swiping to speech recognition, shows that we are (finally) on the right path. I assert from this point onward acceleration to emerge consciousness will be far more rapid than it has been the inflection point was in realizing the statistical nature of the core cognitive algorithm...a blind ...data agnostic and relentless rule...the next hard step (hypothesized to require the 3 attributes listed above) is determining how to tie or self connect these sub systems to create dynamic cognition but much can be achieved along the way with lower intelligence systems which are now emerging and that lack complex autonomic and emotional salience systems.

http://sent2null.blogspot.com/search?q=autonomic    (A series of posts)

http://sent2null.blogspot.com/search?q=emotion (A series of posts)